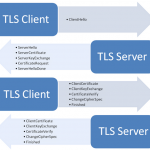 We identify four vulnerable features of the TLS protocol:

We describe the attack on a client C and server S that enable the RSA key exchange and support both resumption and renegotiation. The server is willing to accept connections from clients that are initially unauthenticated but subsequently use certificate-based authentication during renegotiation. (Other variations of the attack below apply if the client and server use DHE or always force client authentication.)